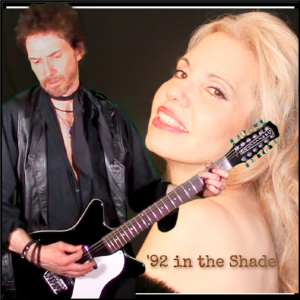 ’92 in the Shade is an original alternative and hard rock band based in Los Angeles that was formed by lead vocalist and guitarist, Michael P. Naughton. The band’s name has a double-meaning: It was inspired by a book written by Thomas McGuane that was later made into a movie starring Peter Fonda and Warren Oats.  It also happens to be the year that many music critics feel was one of the best years for alternative rock and grunge music, not to mention ’92 produced Hollywood classics like Unforgiven, Basic Instinct and Reservoir Dogs. ’92 in the Shade blends alternative rock with cinematic influences and sound to create a unique experience. “Times they are a changin'” as Dylan once sang, and we are still in the shade or influence of that moment. We’re here to heat things up.

Michael P. Naughton of ’92 in the Shade grew up in Detroit. He had the same guitar teacher as John 5 from White Zombie. They were both students of Robert Gillespie who played with MC5. Michael also studied classical guitar.

His first band was a 3 piece called Trilogy, where he performed vocals and guitar in the Detroit area playing Robin Trower, Jimi Hendrix, and other classic rock legends’ music. His next band was Boss, and at age 17 he played in local Detroit area clubs. Then he joined Mommy’s Dearest as the lead singer and lead guitarist. The band moved from Detroit to Los Angeles and played the Sunset Strip. After the band split up he focused on song writing and recording in fringe groups and solo projects during the grunge era.

After a brief connection with Robert DeLeo & Dean DeLeo of Stone Temple Pilots, Michael decided to form ’92 in the Shade and reenter a new era of rock music. He wanted to break convention, ala The White Stripes also from Detroit, with ’92 in the Shade’s lineup by adding some girl power to the band with Donna Novak, a classically trained, multi instrumentalist and singer.

Michael was living in Los Angeles during the ’92 L.A. riots and was close to the chaos, and he still feels we are still in the shade of that moment in more ways than one.