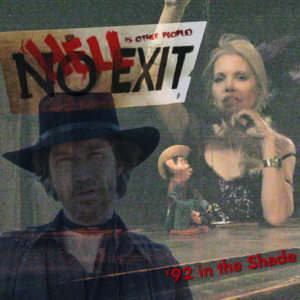 REVIEW OF “NO EXIT (HELL IS OTHER PEOPLE)” by ’92 in the Shade / Reviewer: Zachary Larson

Featuring a heavy dose of cinematic drama, No Exit (Hell Is Other People) by ’92 In The Shade arrives mysteriously and unexpectedly before moving in to your mind. Written by Michael P. Naughton, this new Alternative Rock tune brings in elements of Outlaw Country, Flamenco, and sounds akin to a Spaghetti Western for an unforgettable listening experience. Naughton’s lyrics show a striking observation of the human condition and the strife we put on each other. While Hell may seem like just fire and brimstone, it is really the inescapable talking and evil of other people. The tune is stuffed full of rhythmic guitars, palmas, and a groove that descends into the underworld. It moves like a wildfire across the countryside, leaving nothing but destruction and despair in its wake. With the release of No Exit (Hell Is Other People), ’92 In The Shade puts forward another captivating departure that takes the listener to a place they would have never imagined.

There are a lot of strong points with No Exit (Hell Is Other People). The instrumental work is foreboding and edges on being unmanageable, but it is completely engaging from beginning to end. There are so many colors and textures at play that the tune requires multiple listens. Naughton’s vocals fit perfectly with the lyrics and music. They are gritty, rough, and covered in edges. Even without the music, they would be enough to hold the listener’s attention.

Fans of Alternative Rock and Outlaw Country will dig No Exit (Hell Is Other People) by ’92 In The Shade.

About The Reviewer: Zachary Larson is a professional touring guitarist and multi-instrumentalist.

It's finally here, "No Exit (Hell Is Other People)

No fire. No brimstone. They left us alone. We can